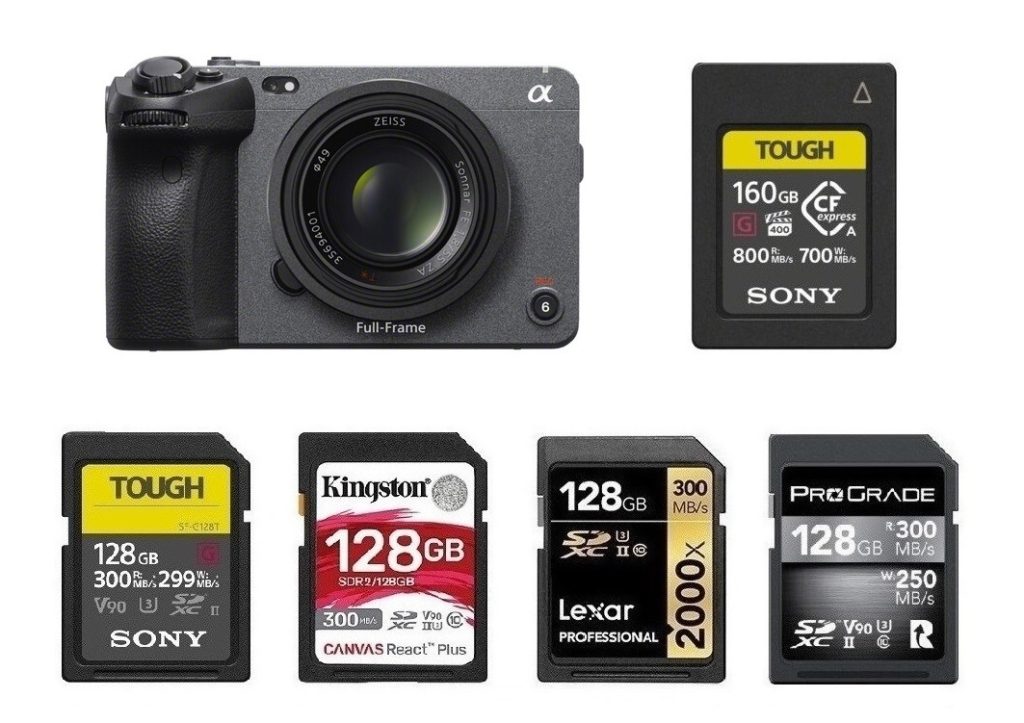 Here is the guide for you to get the top recommended memory cards for Sony FX3 cinema camera, including CFexpress cards (Type A) and UHS-II SD cards.

The Sony FX3 has dual memory card slots that both accept either CFexpress cards (Type A) or UHS-II SD cards. With a compact design for solo shooters, travel applications, and to serve as an ideal B cam, the Sony FX3 (Amazon, B&H, Adorama) bridges the gap between the portability of the a7S III and the capability of the FX6. Its 12.1MP Exmor R BSI CMOS sensor (10.2MP effective in video mode) pairs with a BIONZ XR processor to achieve UHD 4K video capture with internal 10-bit 4:2:2 sampling or 16-bit raw output. The sensor’s BSI design heightens clarity and sensitivity, with an expandable ISO 80-409600 range and greater-than 15-stop dynamic range for working in mixed lighting conditions. Benefitting color and tonal control, an S-Cinetone mode can be used for matching to VENICE, FX9, or FX6 sources and there is also S-Log3/2 gamut support and 10-bit HLG for simple HDR productions. The sensor and processor also work together to greatly reduce rolling shutter and the sensor’s design incorporates a Fast Hybrid AF system for intelligent and quick focusing performance and subject tracking. And finally, Sony FX3’s card slots are ready for CFexpress Type A as well as conventional SDXC UHS-I and UHS-II cards, and having two identical media slots makes relay or backup shooting possible.

Below is our full list of top recommended memory cards for Sony FX3, including CFexpress cards (Type A) and UHS-II SD cards. Hope it can help you get the best out of your Sony FX3 cinema camera.

The Sony FX3 has two memory slots that both support CFexpress Type A cards for higher overall capacity and faster read and write speeds. But when it comes to CFexpress Type A cards, the choices are very limited. Currently, only Sony released their own TOUGH CFexpress Type A card which is available in 80GB and 160GB. Offering both strength and speed, the Sony TOUGH CFexpress Type A card provides fast read speeds up to 800 MB/s along with write speeds up to 700 MB/s. This quick performance benefits recording a variety of video resolutions, bit-rates, and compressions, as well as high-resolution continuous raw photo shooting. Beyond its speed, this TOUGH memory card also has a reinforced physical design to withstand falls from up to 15′ and has been rigidity tested to 70 N of force. It’s also resistant to extreme temperatures, X-rays, electrostatic, and UV lighting. Offering further protection, File Rescue recovery software can be downloaded for recovering lost or even accidentally deleted files and Media Scan Utility can be used to automatically scan CFexpress cards and inform you of the flash memory condition. In addition, you can also get the Sony MRW-G2 CFexpress Type A/SD Card Reader, which allows you to transfer data approximately 2.8 times faster than with conventional media. Overall, we highly recommend the Sony TOUGH CFexpress Type A card as the top choice for the Sony FX3 users.

In addition to the CFexpress Type A cards, both Sony FX3 card slots are also compatible with UHS-II SD memory cards. The Sony SF-G Tough Series UHS-II SD card is currently the world’s fastest SD memory card on the market and the top choice for you. Offering maximum read speeds of up to 300 MB/s and maximum write speeds of up to 299 MB/s, the Sony SF-G Tough UHS-II SD Card is well-suited for video capture, including 8K, 4K XAVC S, 60p AVCHD, 3D, HFR, and Full HD video, as well as super fast continuous shooting. In addition, thanks to its V90 speed class rating, minimum write speeds are guaranteed not to drop below 90 MB/s.

Besides, Kingston Canvas React Plus UHS-II SD Card, ProGrade Digital UHS-II SDXC Card (V90), Delkin Devices Power UHS-II SDXC Card (V90) and Lexar Professional 2000x UHS-II Card are another excellent four choices with a little cheaper price and these four cards offer almost the same speed. If you need some budget choice, you can also consider the Sony SF-M Tough UHS-II SD Card (V60) and the ProGrade Digital UHS-II SD Card (V60). Below are the top recommended UHS-II SD cards for Sony FX3 cinema camera based on the speed and price, just get the one you like!

Don’t own the Sony FX3 yet? Just get it at Amazon, B&H, Adorama.