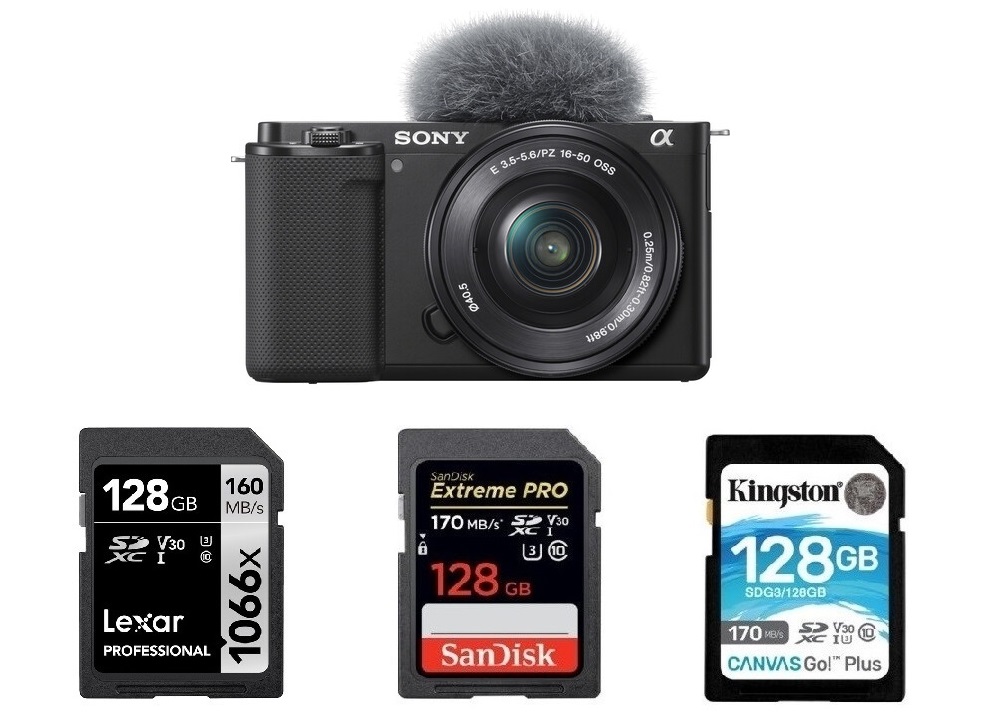 The Sony ZV-E10 has a single SD memory card slot that supports the UHS-I SD cards. Taking a concept that originated with the ZV-1, the Sony ZV-E10 (Amazon, B&H, Adorama) is the mirrorless continuation of this idea of a camera built around the concept of vlogging. Featuring a 24.2MP APS-C Exmor CMOS sensor and BIONZ X image processing, the Sony ZV-E10 is capable of fast continuous shooting up to 11 fps, UHD 4K video recording at up to 30p and Full HD recording at up to 120p. A vari-angle screen lets you accurately frame up shots, the integrated directional mic is purpose-built for recording more accurate sound from front-facing subjects, and shooting modes like Background Defocus and Product Showcase help you highlight specific subjects with ease. What’s more, the Sony ZV-E10 gets 82% overall score from the experts at DPReview.

Below is our full list of top recommended SD cards for the Sony ZV-E10. Hope it can help you get the best out of your Sony ZV-E10 mirrorless camera.

As we mentioned above, the Sony ZV-E10 has only one SD card slot that is limited to UHS-I speeds. That means it can’t get any extra write speed benefit from the UHS-II SD cards, and you can easily save some money by getting a fast and reliable UHS-I card. Speaking of the UHS-I SD cards, the Lexar Professional 1066x UHS-I SD Card, SanDisk Extreme PRO UHS-I SD Card and Kingston Canvas Go! Plus UHS-I SD Card are the top three choices for you! Below are the top recommended SD cards for Sony ZV-E10 based on the speed and price, just get the one you like!