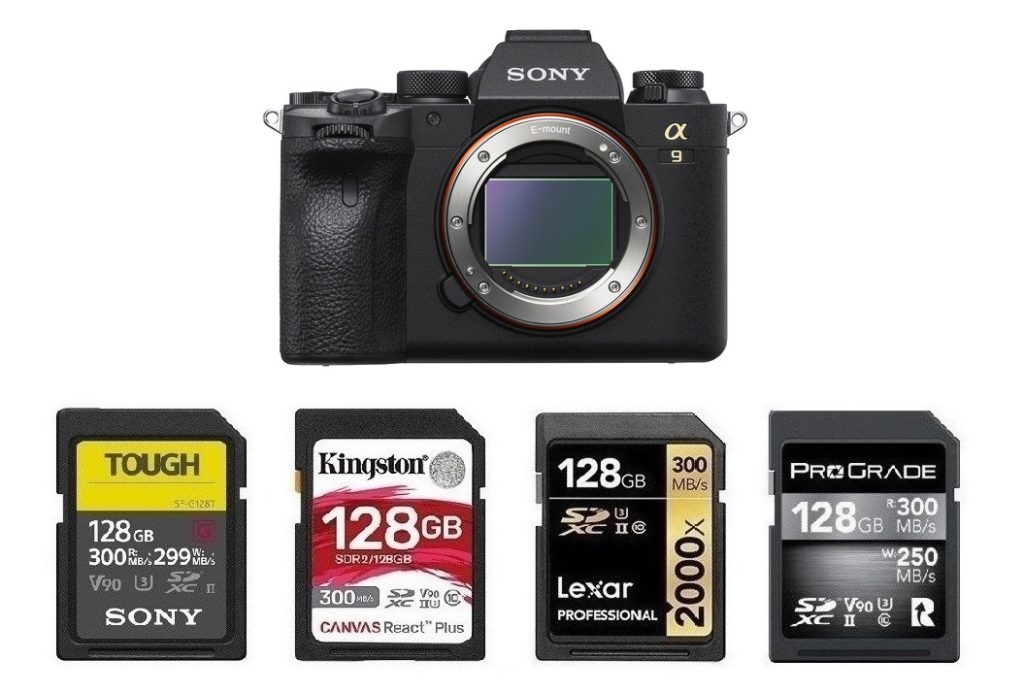 The Sony a9 II has dual SD memory card slots that both support the ultra-fast UHS-II SD cards. Utilizing the proven 24.2MP full-frame Exmor RS BSI stacked CMOS sensor and an updated BIONZ X processor, the Sony a9 II (Amazon, B&H, Adorama) is capable of up to 20 fps continuous shooting with a silent electronic shutter or up to 10 fps shooting with a mechanical shutter, and it supports UHD 4K video recording up to 30 fps as well as full HD 1080p recording at up to 120 fps. Additionally, 5-axis SteadyShot INSIDE sensor-shift image stabilization is available, too, which minimizes the appearance of camera shake by up to 5.5 stops. What’s more, the Sony a9 II gets 90% overall score and Gold Award from the experts at DPReview and it is an ideal camera for sports, action and event photography specialists, run-and-gun video shooters that need solid out-of-camera footage and generalist photographers that want the best autofocus performance they can find.

Below is our full list of top recommended UHS-II SD cards for the Sony a9 II mirrorless camera. We highly recommend picking up a couple of V90 UHS-II SD cards from the list below to get the best out of your camera.

In addition, the Kingston Canvas React Plus UHS-II SD Card is another great choice and great value SD card for shooting 8K, 4K, and Full HD video, as well as high-resolution photos. Besides, the ProGrade Digital UHS-II SDXC Card (V90) and the Delkin Devices Power UHS-II SDXC Card (V90) are two of the most popular SD cards with an affordable price on the market! If you need some fast and reliable UHS-II SD cards without spending too much (like Sony SF-G Tough UHS-II SD Card), these two cards are the perfect choice for you. If you need some budget choice, you can also consider the Sony SF-M Tough UHS-II SD Card (V60) and the ProGrade Digital UHS-II SD Card (V60). Below are the top recommended UHS-II SD cards for Sony a9 II mirrorless camera based on the speed and price, just get the one you like!