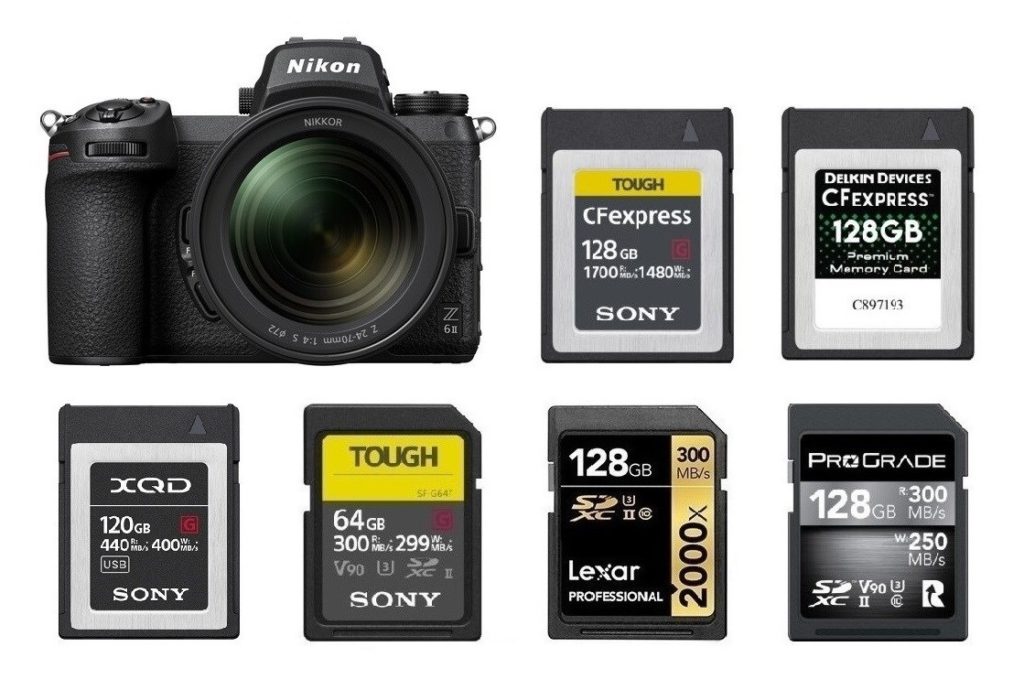 The Nikon Z6 II has dual memory card slots: the card slot 1 supports CFexpress (Type B) and XQD cards while the card slot 2 is compatible with UHS-II SD cards. Featuring a 24.5MP FX-format BSI CMOS sensor and Dual EXPEED 6 image processors, the Nikon Z6 II (Amazon, B&H, Adorama) is characterized by an increased buffer depth and faster continuous shooting rate, up to 14 fps with single-point AF or 12 fps shooting in other focusing modes, and it is capable of recording UHD 4K video with full pixel readout up to 30p and Full HD 1080p video up to 120p for slow motion playback. The sensor also suits working in a variety of lighting conditions, with sensitivity from ISO 100-51200, and in-body 5-axis Vibration Reduction reduces the appearance of camera shake for sharper handheld shooting. What’s more, the Nikon Z6 II gets 89% overall score and Silver Award from the experts at DPReview and it is an ideal camera for those who are looking for an enthusiast camera that will do a bit of everything.

Below are our top recommended memory cards for the Nikon Z6 II, including CFexpress cards, XQD cards and SD cards. Hope it can help you get the best out of your Nikon Z6 II mirrorless camera.

The Nikon Z6 II card slot 1 supports the ultra-fast CFexpress Type B cards that is ideal for 8K, 6K, 4K video and high-speed, high-resolution burst shooting needs. The CFexpress card is currently the fastest and the most capable memory card format on the market, and it will be the standard of future memory cards for internal high resolution RAW video recording since its theoretical maximum speeds are ridiculously high. Currently, Sony TOUGH CFexpress Card, Delkin Devices CFexpress Card, SanDisk Extreme PRO CFexpress and ProGrade Digital CFexpress Card are the top choices for you!

Offering fast read speeds up to 1700 MB/s along with write speeds up to 1480 MB/s, the Sony TOUGH CFexpress Type B Memory Card is one of fastest memory cards around, and it is ideal for recording a variety of video resolutions, bit-rates, and compressions, as well as uncompressed continuous RAW shooting of fast-moving action such as motorsports and wildlife. Beyond its speed, this TOUGH memory card also has a reinforced physical design to withstand falls from up to 15′ and has been rigidity tested to 70 N of force.

Besides, the ProGrade Digital Cobalt Series CFexpress Cards and the Delkin Devices POWER/BLACK CFexpress cards are another super fast choices and they provide read speeds of up to 1730 MB/s and write speeds of up to 1540 MB/s, making them suitable for professional photographers and videographers. In addition, the SanDisk Extreme PRO CFexpress card is also one of the most popular choice if you like recording 4K videos and burst shooting. Below are the top recommended CFexpress Type B cards for Nikon Z6 II mirrorless camera based on the speed and price, just get the one you like!

In addition to the CFexpress cards, the Nikon Z6 II card slot 1 also supports the XQD cards. But when it comes to XQD cards, the choices are very limited. Sony has pioneered the XQD format, and produces the best cards at the moment. Offering up to 440 MB/s read speeds and up to 400 MB/s write speeds, the Sony G Series XQD cards are the best choice and the most favorite among professional photographers – ideal for recording 4K video and up to 200 continuous raw still image bursts. In addition, Delkin Devices and Nikon also released their own XQD cards with the same write speeds and read speeds. Below are the top recommended XQD cards for Nikon Z6 II mirrorless camera.

The Sony SF-G Tough Series UHS-II SD card is currently the world’s fastest SD memory card on the market and the top choice for you. Offering maximum read speeds of up to 300 MB/s and maximum write speeds of up to 299 MB/s, the Sony SF-G Tough UHS-II SD card is well-suited for video capture, including 8K, 4K XAVC S, 60p AVCHD, 3D, HFR, and Full HD video, as well as super fast continuous shooting. In addition, thanks to its V90 speed class rating, minimum write speeds are guaranteed not to drop below 90 MB/s.

Besides, Kingston Canvas React Plus UHS-II SD Card, ProGrade Digital UHS-II SDXC Card (V90), Delkin Devices Power/Black UHS-II SDXC Card (V90) and Lexar Professional 2000x UHS-II Card are another excellent four choices with a little cheaper price and these four cards offer almost the same speed. If you need some budget choice, you can also consider the Sony SF-M Tough UHS-II SD Card (V60) and the ProGrade Digital UHS-II SD Card (V60). Below are the top recommended UHS-II SD cards for Nikon Z6 II mirrorless camera based on the speed and price, just get the one you like!

Don’t own the Nikon Z6 II yet? Just get it at Amazon, B&H, Adorama.