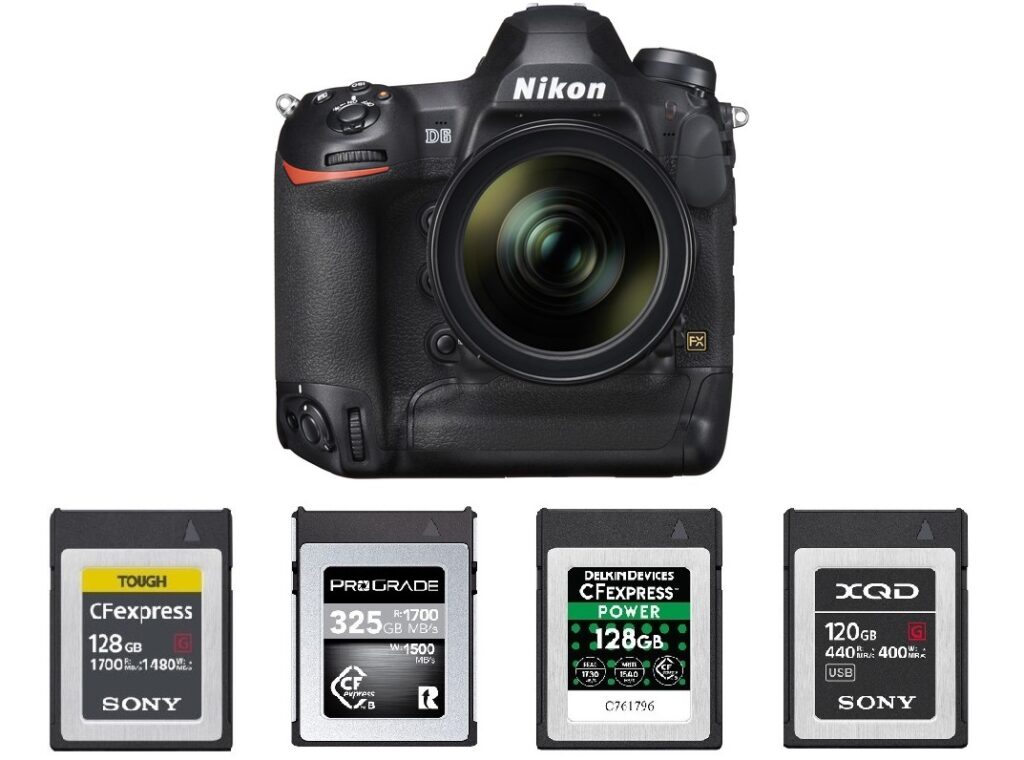 Here are the top recommended memory cards for Nikon D6 DSLR camera, including XQD cards and CFexpress cards (Type B).

The Nikon D6 has dual memory card slots that both support the XQD cards and the ultra-fast CFexpress Type B cards. Like the EOS-1D X Mark III, the Nikon D6 (Amazon, B&H, Adorama) is primarily intended for professional sports, news and nature photographers. Featuring a 20.8MP FX-format sensor and an EXPEED 6 image processor, the Nikon D6 supports an impressive 14 fps continuous shooting rate for up to 200 consecutive frames, a native sensitivity range from ISO 100-102400 (expandable up to ISO 3280000), and UHD 4K video recording at 30 fps. When working with stills, a revised high-density Multi-CAM 37K autofocus system features 105 cross-type points that improve focusing precision and speed, and with 1.6x greater frame coverage, the need to recompose while shooting is greatly reduced. So, with a high series speed, a reliable autofocus system, excellent image quality, a tough weather-sealed camera body and exceptional battery life, the Nikon D6 is an ideal camera for sports photographers and photojournalists.

So, have you picked up a Nikon D6 recently? If so, then you might be thinking about which are the best memory cards for your camera. Here we’ve list the best XQD cards and CFexpress cards for Nikon D6 DSLR camera based on the speed and price. Hope it can help you get the best out of your Nikon D6 camera.

As we mentioned above, the Nikon D850 has 2 x memory card slots that are both compatible with the XQD cards. But when it comes to XQD cards, the choices are very limited. Currently, there are only three choices for you: Sony G Series XQD Card, Delkin Devices Premium XQD Card and Nikon XQD Card.

Don’t own the Nikon D6 yet? Just get it at Amazon, B&H, Adorama.