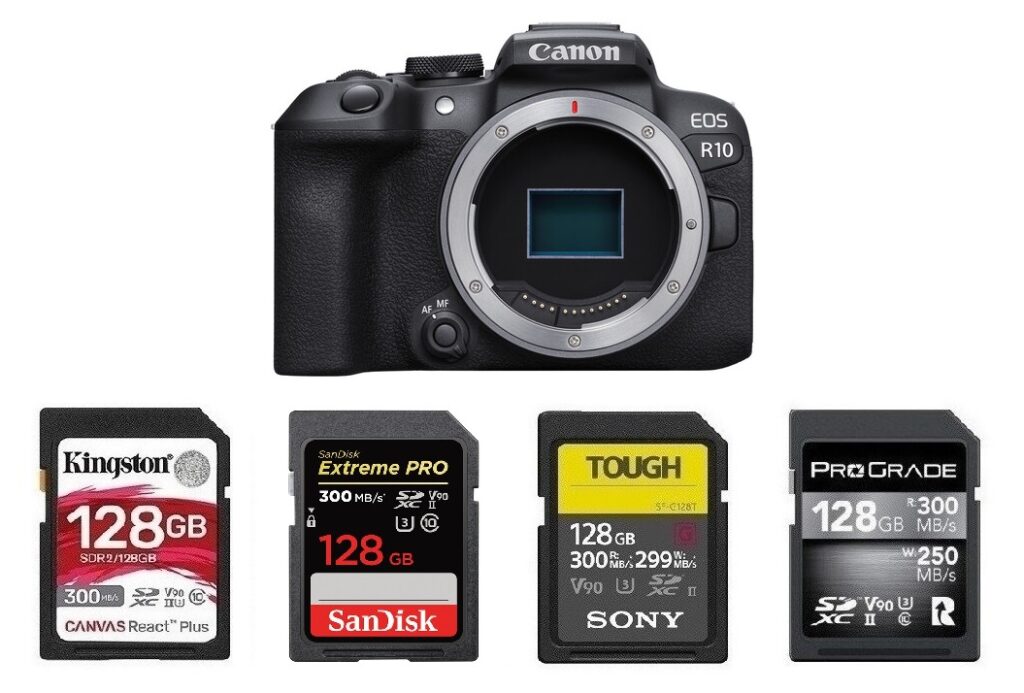 The Canon EOS R10 has a single SD memory card slot that supports the ultra-fast UHS-II SD cards. Featuring a 24.2MP APS-C CMOS sensor and DIGIC X processing, the Canon EOS R10 supports up to 23 fps continuous shooting with a silent electronic shutter or 15 fps with a mechanical shutter, with AF and AE readings before each frame. Beyond stills, the Canon EOS R10 (Amazon, B&H, Adorama) also offers high-res UHD 4K 8-bit recording, with the ability to record at up to 60p using a cropped portion of the sensor or at 30p when using an oversampled 6K recording area for improved sharpness and lower noise, as welll as Full HD 120p recording for slow-motion playback.

The Canon EOS R10 has only one SD card slot that is rated for UHS-II card speeds to support fluent 4K video recording and high-speed continuous shooting.

The Kingston Canvas React Plus UHS-II SD Card is now the No. 1 top recommended UHS-II SD card based on its affordable price, fast speed and excellent performance. Compared to the other top 4 options, this Kingston SD card is more affordable and reliable. Offering maximum read speeds of 300 MB/s and maximum write speeds of 260 MB/s as well as the V90 Video Speed Class rating, the Kingston Canvas React Plus UHS-II SD Card is well suited for shooting 8K, 4K, and Full HD video, as well as high-resolution photos. It has a variety of large-capacity package options from 32GB to 256GB, which can fully meet the needs of consumers for personalized storage. Protection is provided by a limited lifetime warranty.  I use the card myself in my Canon R6 so I’m very comfortable in recommending it, so just get it at Amazon, B&H.

The SanDisk Extreme Pro UHS-II SD Card (V90) is another great choice, but you have to spend a little more than the Kingston SD card. It is one of the fastest, best reviewed and most reliable memory cards on the market. The V90 Video Speed Class rating ensures write speeds do not drop below 90 MB/s. And they are available in a variety of capacities ranging from 32GB to 128GB. Just get it at Amazon, B&H.

Offering maximum read speeds of up to 300 MB/s and maximum write speeds of up to 299 MB/s, the Sony SF-G Tough Series UHS-II SD card is currently the world’s fastest SD card on the market and one of the top choices for you, and it is ideal for super fast continuous shooting as well as video capture, including 8K, 4K XAVC S, 60p AVCHD, 3D, HFR, and Full HD video. In addition, thanks to its V90 speed class rating, minimum write speeds are guaranteed not to drop below 90 MB/s. The only downside is: this card is a little expensive for many photographers. See more reviews at Amazon, B&H.

Or, if you need some cheaper, a little slower and reliable SD cards, you can also consider the Sony SF-M Tough UHS-II SD Card (V60), ProGrade Digital UHS-II SD Card (V60), and the Angelbird AV Pro MK2 UHS-II SDXC Card (V60). These three cards are slower than the the top 5 recommended SD cards above, but they are also great for continuous shutter bursts and rapid shooting, as well as RAW and JPEG captures, and well-suited for video capture, including 4K, Full HD, and 3D video. You can also get one if you want to save some money with a reliable SD card.

In addition to the faster UHS-II SD cards, the Canon EOS R10 is also support the slower UHS-I SD cards.

If you don’t often recording 4K video or shoot many continuous bursts, then you might be happy enough with the slower UHS-I cards, so you can easily save some money by purchasing a reliable UHS-I cards instead.

The Canon EOS R10 is perfect for content creators looking for a camera option to capture high-quality action videos and images of sports, wildlife, and motorsports. If you have’t had one, just get it at Amazon, B&H, Adorama.