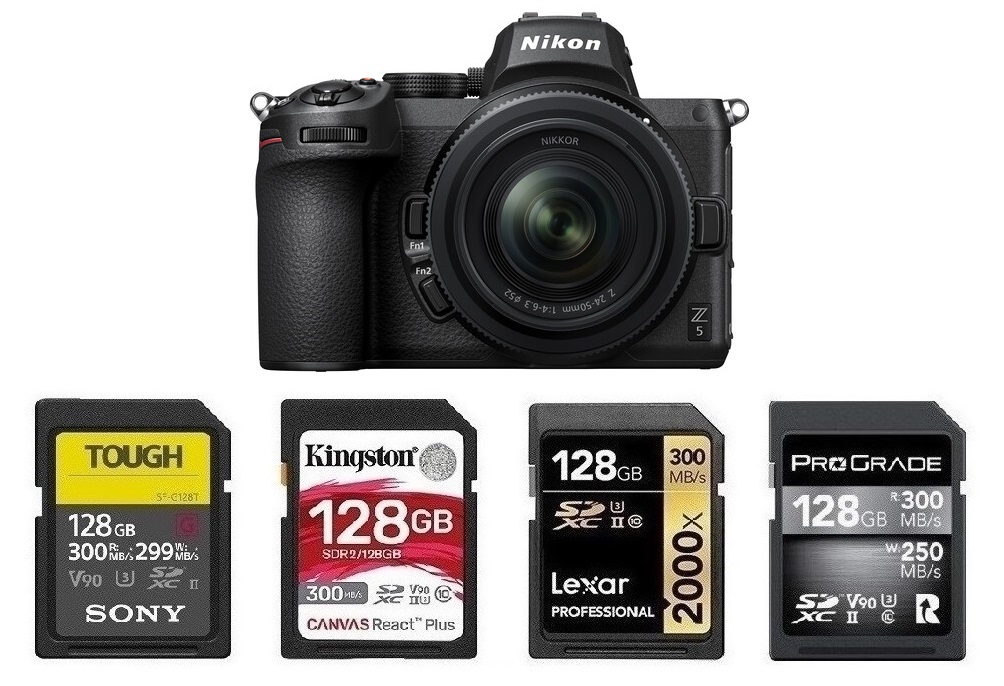 In this post, we will show you the top recommended SD memory cards for Nikon Z5 mirrorless camera.

The Nikon Z5 has dual SD memory card slots that both support the ultra-fast UHS-II SD cards. As the new entry point to Nikon’s full-frame mirrorless lineup, the Nikon Z5 offers a lot of power and capabilities at an attractive price, empowering the next generation to begin their journey with the confidence to learn and grow as creators. Featuring a 24.3MP FX-Format CMOS Sensor and an EXPEED 6 image processor, the Nikon Z5 (Amazon, B&H, Adorama) supports a top full-resolution continuous shooting rate of 4.5 fps as well as the ability to take 8MP when recording video, and it is capable of recording UHD 4K video at 30 fps (with a 1.7X crop) and full HD video at up to 60 fps, with the ability to save movie files to the in-camera memory cards or to an optional external recorder via HDMI out. In addition to its high performance, the Nikon Z5 is equipped with various functions, including in-camera vibration reduction (VR) that provides camera-shake compensation equivalent to a 5.0-stop increase in shutter speed, a hybrid AF system with 273 focus points covering a broad area of the frame, and Eye-Detection AF and Animal-Detection AF that are convenient for capturing portraits of human subjects, and dogs or cats. What’s more, the Nikon Z5 gets 89% overall score and Gold Award from the experts at DPReview and it is an ideal camera for anyone seeking a well-priced, stills-oriented full-frame mirrorless camera.

Below is our full list of top recommended UHS-II SD cards for the Nikon Z5 mirrorless camera. We highly recommend picking up a couple of V90 UHS-II SD cards from the list below to get the best out of your camera.

Below are the top recommended UHS-II SD cards for Nikon Z5 mirrorless camera based on the speed and price, just get the one you like!

Don’t own the Nikon Z5 yet? Just get it at Amazon, B&H, Adorama.