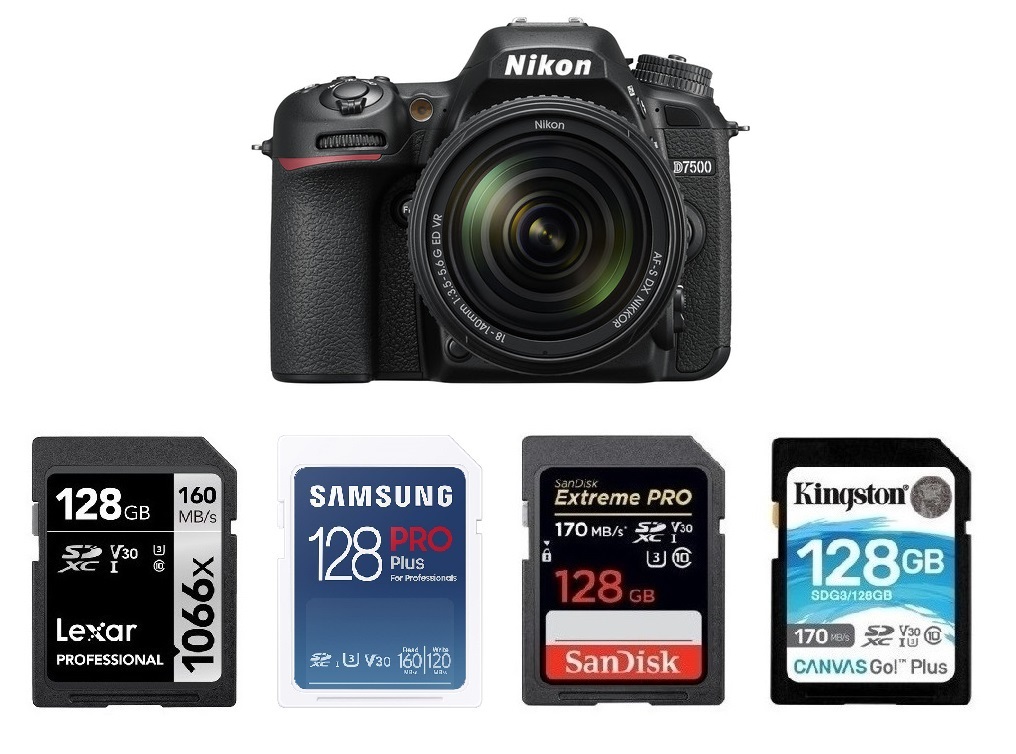 The Nikon D7500 has a single SD memory card slot that supports the UHS-I SD cards. Designed as a true all-arounder, the Nikon D7500 (Amazon, B&H, Adorama) is a DX-format DSLR offering a versatile feature-set to appeal to photographers and videographers alike. Featuring a 20.9MP DX-Format CMOS sensor and EXPEED 5 image processor, the Nikon D7500 supports an 8 fps continuous shooting rate for up to 100 consecutive JPEGS, a native sensitivity range to ISO 51,200 that can be expanded up to ISO 1,640,000, and 4K UHD video recording at 30, 25, and 24 fps, Full HD recording at up to 60 fps and time-lapse recording capabilities. In addition, the Nikon D7500 gets 86% overall score and Silver Award from the experts at DPReview, and it is suggested for sports and action shooters, as well as anyone looking for a traditional, well-featured DSLR for stills shooting.

Below is the full list of our top recommended SD cards for Nikon D7500 DSLR camera, just get the one you like!

The Nikon D7500 has only one SD card slot that is limited to UHS-I speeds. That means it can’t get any extra write speed benefit from the UHS-II SD cards, and you can easily save some money by getting a fast and reliable UHS-I card.

The newly released Lexar Professional 1066x UHS-I SD Card and Samsung PRO Plus UHS-I SD Card are the top two fastest UHS-I SD cards on the market offering the same maximum read speeds of up to 160 MB/s and maximum write speeds of up to 120 MB/s. Thanks to the V30/U3 class rating, write speeds are guaranteed not to drop below 30 MB/s, making it suitable for 4K, Full HD, and 3D video, as well as raw and JPEG captures, plus rapid shutter bursts.

Besides, the SanDisk Extreme PRO UHS-I SD Card and the Kingston Canvas Go! Plus UHS-I SD Card are another two of the most popular cards out there and are almost always two of my top recommended UHS-I SD cards on the list. Offering the same up to 170 MB/s read speeds and up to 90 MB/s write speeds, these two cards are ideal for shooting 4K UHD video and burst-mode photography, and they supports the V30 speed class, which guarantees minimum write speeds of 30 MB/s. In addition, if you need some budget choice, you can also consider the SanDisk Extreme UHS-I SD Card (V30, U3).