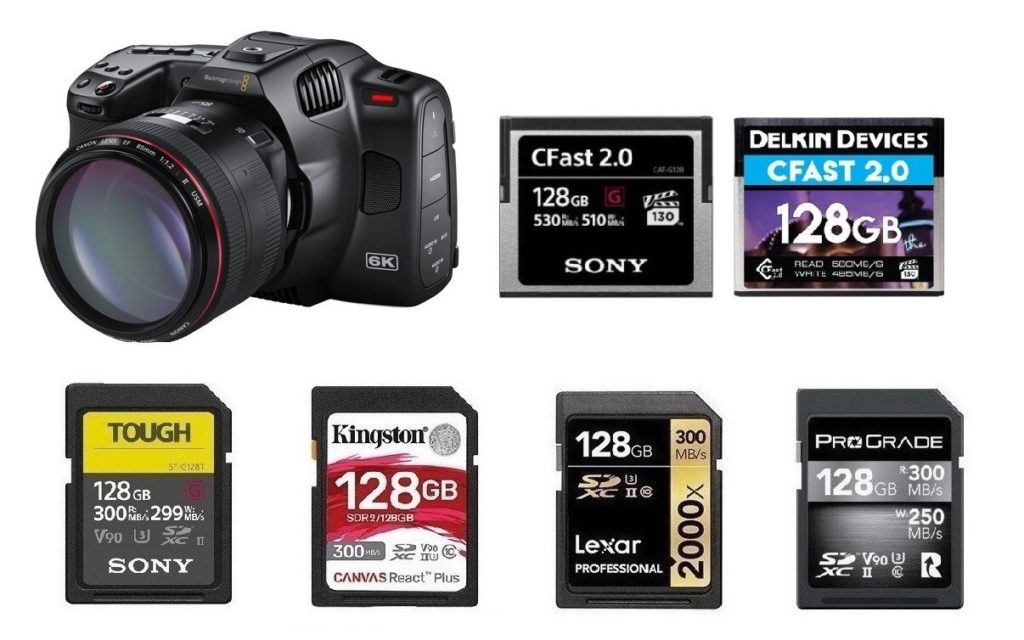 Here is the guide for you to get the top recommended memory cards for BMPCC 6K Pro, including CFast cards and UHS-II SD cards.

Below are top recommended memory cards for BMPCC 6K Pro, including CFast cards and UHS-II SD cards. Hope it can help you get the best out of your BMPCC 6K Pro cinema camera.

The BMPCC 6K Pro card slot 1 supports the ultra-fast CFast 2.0 memory cards. Designed for professional photographers and videographers, the Sony G Series CFast 2.0 Memory Card, Delkin Devices Premium/Cinema CFast 2.0 Memory Card, ProGrade Digital CFast 2.0 Memory Card and SanDisk Extreme PRO CFast 2.0 Memory Card are the top choices for you to capture DCI 4K (4096 x 2160), Ultra HD (3840 x 2160), and Full HD (1920 x 1080) video at 120 fps, as well as raw still images and rapid-fire bursts. Thanks to its fast read and write speeds, you will be able to quickly offload large files from the card for storage or editing. And thanks to the Video Performance Guarantee 130 (VPG-130) standard, write speeds will not drop below 130 MB/s. In addition, built for professional use, these cards are tested for dependable storage and feature resistance against shock, static, and breakage, as well as the ability to perform in temperatures ranging from 23 to 158°F. Below are the top recommended CFast cards for BMPCC 6K Pro cinema camera based on the speed and price, just get the one you like!

The card slot 2 of BMPCC 6K Pro is compatible with the UHS-II SD memory cards. The Sony SF-G Tough Series UHS-II SD card is currently the world’s fastest SD memory card on the market and the top choice for you. Offering maximum read speeds of up to 300 MB/s and maximum write speeds of up to 299 MB/s, the Sony SF-G Tough UHS-II SD Card is well-suited for video capture, including 8K, 4K XAVC S, 60p AVCHD, 3D, HFR, and Full HD video, as well as super fast continuous shooting. In addition, thanks to its V90 speed class rating, minimum write speeds are guaranteed not to drop below 90 MB/s.

Besides, Kingston Canvas React Plus UHS-II SD Card, ProGrade Digital UHS-II SDXC Card (V90), Delkin Devices Power UHS-II SDXC Card (V90) and Lexar Professional 2000x UHS-II Card are another excellent four choices with a little cheaper price and these four cards offer almost the same speed. If you need some budget choice, you can also consider the Sony SF-M Tough UHS-II SD Card (V60) and the ProGrade Digital UHS-II SD Card (V60). Below are the top recommended UHS-II SD cards for BMPCC 6K Pro cinema camera based on the speed and price, just get the one you like!

Don’t own the BMPCC 6K Pro yet? Just get it at Amazon, B&H, Adorama.