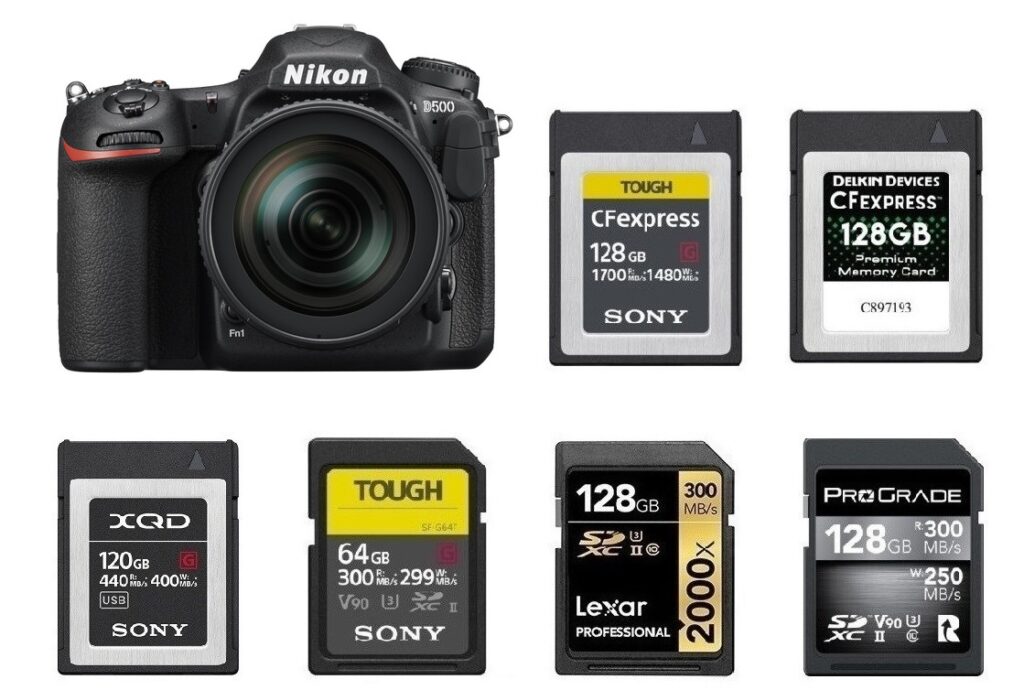 Just like the Nikon D850, the Nikon D500 has dual memory card slots: 1 x UHS-II SD card slot and 1 x XQD card / CFexpress (Type B) card slot. As the flagship model within Nikon’s DX-format DSLR line, the Nikon D500 (Amazon, B&H, Adorama) is characterized by its robust physical construction, apt imaging capabilities, and of course, a more compact, sleek form factor than its FX brethren. Featuring a 20.9MP DX-Format CMOS Sensor and an EXPEED 5 Image Processor, the Nikon D500 is capable of continuous shooting up to 10 fps with full-time autofocus and exposure metering for up to 200 frames, and it supports 4K UHD video recording at 30, 25, and 24 fps frame rates and Full HD/HD recording at up to 60 fps. With amazing imaging capability, robust build quality, lightning fast performance, 10fps shooting capability and first-rate metering and white balance systems, the Nikon D500 might be the best DX-format digital SLR Nikon has ever made. What’s more, the Nikon D500 gets 91% overall score and Gold Award from the experts at DPReview, and it is suggested for anyone looking to shoot sports or crucial-moment photography as well as photographers looking for a durable camera with excellent ergonomics.

The Nikon D500 card slot 1 is compatible with the widely-used UHS-II SD cards. Below is a quick comparison table of top recommended SD cards for Nikon D500 dslr camera, just get the one you like.

Our top pick is the Sony SF-G Tough UHS-II SD Card. Offering maximum read speeds of up to 300 MB/s and maximum write speeds of up to 299 MB/s, the Sony SF-G Tough Series UHS-II SD card is currently the world’s fastest SD card on the market, and it is well-suited for video capture, including 8K, 4K XAVC S, 60p AVCHD, 3D, HFR, and Full HD video, as well as super fast continuous shooting. In addition, thanks to its V90 speed class rating, minimum write speeds are guaranteed not to drop below 90 MB/s. So, if you are seeking the highest write speed with a V90 rating as well as extremely high 250-300MB/s read speeds for transferring photos from the card to a computer, this is the recommended card for you. The only downside is: this card is a little expensive for many photographers.

The Nikon D500 card slot 2 is compatible with the XQD cards. When it comes to XQD cards, the choices are very limited. Currently, there are only three choices for you: Sony G Series XQD Card, Delkin Devices Premium XQD Card and Nikon XQD Card.

In addition to the XQD cards, the Nikon D500 card slot 2 also supports the ultra-fast CFexpress Type B cards. Below is the full list of the top recommended CFexpress cards for Nikon D500.