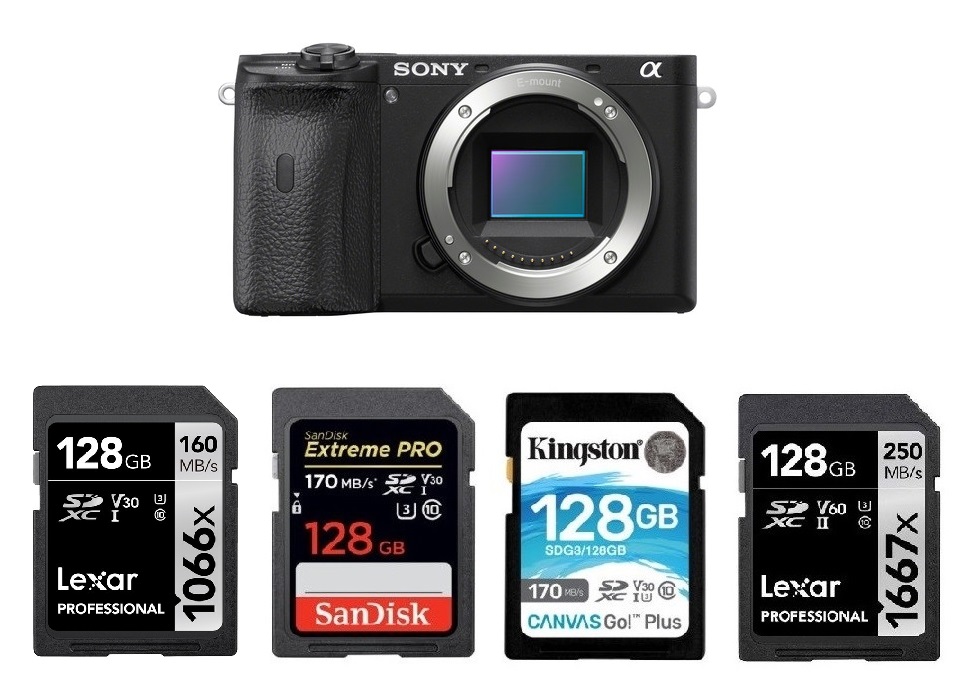 The Sony a6600 has a single SD memory card slot that supports the UHS-I SD cards. With an emphasis on speed and versatility, the Sony a6600 (Amazon, B&H, Adorama) is a sleek-yet-fully-featured APS-C-format mirrorless camera well-suited for both stills and video. Sporting a revised 24.2MP APS-C Exmor CMOS Sensor and the BIONZ X Image Processor, the Sony a6600 is capable of continuous shooting up to 11fps with Real-time Eye AF, as well as recording up to UHD 4K30p video and Full HD 1080p video up to 120 fps with no recording time limit. Complementing both stills and video, 5-axis SteadyShot INSIDE image stabilization minimizes the appearance of camera shake with all mounted lenses to support working with slower shutter speeds. What’s more, the Sony a6600 gets 83% overall score and Silver Award from the experts at DPReview and it is an ideal camera for family and people photographers, most sports and action shooters, general and travel photography.

So, in order to get the best out of your camera, here we list the top recommended SD cards for Sony a6600 mirrorless camera based on the speed and price. Just choose the one you like!

Best Memory Cards for Sony a6600

As we mentioned above, the Sony a6600 has only one SD card slot that is limited to UHS-I speeds. That means it can’t get any extra write speed benefit from the fast UHS-II cards, but it can still take advantage of the fast read speeds of UHS-II cards, which enables you to transfer files to your computer quicker. So the best choice for you is to get a fast and reliable UHS-I SD card.

Offering maximum read speeds of up to 160 MB/s and maximum write speeds of up to 120 MB/s, the new Lexar Professional 1066x UHS-I SD Card (V30, U3) is the fastest UHS-I SD card on the market and the top choice for you. This card has also been designed with the V30 Video Speed Class rating, which guarantees minimum write speeds of at least 30 MB/s. Besides, the SanDisk Extreme PRO UHS-I SD Card and the Kingston Canvas Go! Plus UHS-I SD Card are another two of the fastest UHS-I SD cards and the most popular cards out there and are almost always two of my top recommended UHS-I SD cards. Offering the same up to 170 MB/s read speeds and up to 90 MB/s write speeds, these two cards are ideal for shooting 4K UHD video and burst-mode photography, and they supports the V30 speed class, which guarantees minimum write speeds of 30 MB/s. In addition, if you need some budget choice, you can also consider the SanDisk Extreme UHS-I SD Card (V30, U3).

Or, if you are seeking the extremely high 250-300MB/s read speeds for transferring photos faster from the card to a computer, here we also list the top recommended UHS-II cards for your camera. For Sony a6600 users, Kingston Canvas React Plus UHS-II SD Card, ProGrade Digital UHS-II SDXC Card (V90), Delkin Devices Power UHS-II SDXC Card (V90) and Lexar Professional 2000x UHS-II Card are excellent four choices with affordable price and these four cards offer almost the same speed. If you need some budget choice, you can also consider the Sony SF-M Tough UHS-II SD Card (V60), ProGrade Digital UHS-II SD Card (V60), or the Lexar Professional 1667x UHS-II SD Card (V60). Below are the top recommended SD cards for Sony a6600 based on the speed and price, just get the one you like!